More prophecy being fulfilled, people flocking back to their own nations, India (Elamites) issuing state sponsored rescue flights for their citizen abroad.

The man is a reference to a man of the Lord, an Israelite male that is of the elect 1/3 of our nation.

The earth moving out of its place is a reference to great earthquakes.

The chased roe is a reference to the fallen state of the Edomite nations, in particular America.

The Medes is a reference to modern day Russia. Their future attack on the United States will not be stayed with a bribe. 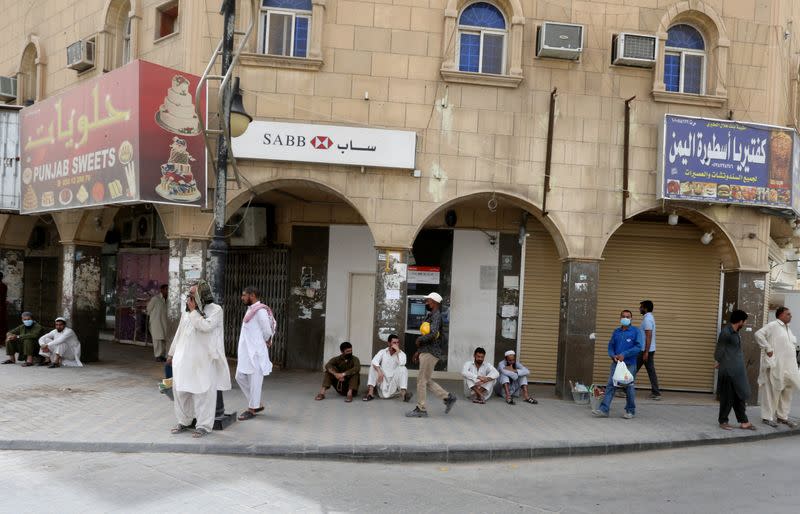 Foreign workers sit on the street after losing their jobs, following the outbreak of the coronavirus disease (COVID-19), in Riyadh

By Davide Barbuscia and Marwa Rashad

DUBAI/RIYADH (Reuters) – A popular Saudi talk show host told private businesses this week it was their national duty to lay off foreign rather than local employees, warning that the dominance of Saudi Arabia’s workforce by expatriates was a “real danger”.

Khaled al-Oqaily’s comments on his daily TV show encapsulated the dilemma faced by 35 million foreigners who form the Gulf’s economic backbone: as firms shed jobs because of the coronavirus pandemic and oil price crash, and governments move to protect citizens’ jobs and wages, should they stay or go?

The expatriate exodus is expected to be larger than after the 2008-2009 financial crisis and the 2014-2015 plunge in prices for oil, the region’s main export, the International Labour Organization (ILO) said, without giving figures.

In Oman alone, the number of expatriates dropped by over 340,000 in 2010 following the 2008-2009 crisis, according to official data. That year, Oman’s economic growth slowed by 1.3 percentage points, World Bank data show.

This time around, many foreign workers remain stranded without a safety net as Gulf states try to organise ways of getting them home.

Hundreds of thousands of migrants, mostly Asians, have registered for repatriation, according to figures from embassies and authorities in the region, which has seen COVID-19 spread among low-income foreign workers in overcrowded living quarters.

Pakistan and India have started evacuating citizens from the Gulf. Egypt has begun repatriation flights from Kuwait, where security forces quelled a riot by Egyptians at a shelter housing residency violators this week.

Farman, one of 60,000 Pakistanis registered to leave the UAE, lost his job as a school bus driver two months ago after education centres closed under virus containment measures.

“I want to go home because what’s the point of staying without work?” he said, standing in a dimly lit street in front of communal housing in Dubai’s Al Quoz industrial area.

And it is not only blue-collar workers who are caught up in the coronavirus squeeze. Many qualified professionals have not been spared.

“You go online, you apply for thousands of jobs, but they’re all expired,” said Egyptian-American architect Nada Karim, who was due to start a new job in Dubai when the firm froze hiring.

“I can resist here for two or three months without a salary, then I’ll have to leave.”

Samer, a Lebanese-Canadian working at an advertising agency in Saudi Arabia, has been put on six-month unpaid leave and is considering moving to Canada if things do not improve.

“It is very confusing and worrying when you suddenly cannot plan for your future,” he said.

The Middle East is headed for an economic downturn this year that dwarfs 2008 and 2014/2015 as countries are hit by the double blow from coronavirus closures and record low oil prices, the International Monetary Fund said.

“Fewer expats will crimp demand for everything from pizzas to villas, and the danger is that this leads to a cascading deflationary impact with secondary job losses,” said Tarek Fadlallah of Nomura Asset Management Middle East.

Official unemployment data is not available, but several Gulf airlines and ride-sharing firm Careem have said they are laying off hundreds of workers.

Dubai, a business and tourism hub, was hoping for an economic boost from hosting the Expo world fair this year but the event was postponed until Oct. 2021 due to the pandemic.

Last week, Expo 2020 Dubai made redundant 179 employees, according to an internal document seen by Reuters. Expo declined to comment.

“Expatriates are not just a cog in the machine – they play an integral part in the domestic recycling of capital that helps sustain Gulf economies,” said Robert Mogielnicki, a resident scholar at the Arab Gulf States Institute in Washington.

The flight of expats could reduce government income from fees and value-added tax and slow reform efforts, including reducing state spending on wages and subsidies, analysts have said.

Gulf states will likely speed up programmes to “nationalise” jobs, with Oman last month ordering state firms to replace foreign employees with nationals. But this could make it even more difficult to jump-start economic growth, analysts said.

Presenter Oqaily, in a show aired on state-owned SBC TV, criticised Saudi businesses retaining expatriates as “having no shame and knowing nothing about loyalty to the country.

“We have to stop making the Saudi employee a scapegoat with every crisis,” he said. “Get rid of the foreign labour that replaced the more skilled Saudis.”

Ukraine is a Testing Ground for MOTB Social Credit System in “the West” | Revelation 13:17