Just the beginning of the prophesies of 2Esdras 15 coming to pass. KJV 1611 version.

Meaning when the people take action, the elites of Esau will be unable to stop them. And it is only going to get worse. 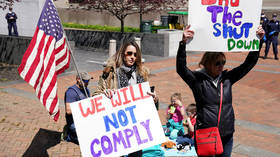 FILE PHOTO: Protesters hold signs in opposition to Virginia’s stay-at-home order, part of a growing number of residents across several states demanding an end to lockdown measures. ©  Reuters / Kevin Lamarque
Follow RT on
Minnesota Governor Tim Walz has relaxed the state’s Covid-19 containment measures, scaling back restrictions on outdoor activities with an executive order as outraged residents take to the streets to demand an end to the lockdown.

While some forms of outdoor recreation were permitted under a previous directive, an array of businesses will be allowed to reopen after Friday’s executive order, including golf courses, privately managed trails and parks, marinas and docks, bait shops, showrooms and repair shops for off-road vehicles, and outdoor shooting ranges.

The new relaxed rules came on the heels of heated protest from Minnesota residents, who gathered outside of the governor’s mansion in St. Paul on Friday to call on officials to repeal the stay-at-home order, in force since late March. Those who couldn’t join in person did so digitally, through the #ReopenMN hashtag.

#ReopenMNTheo Keith @TheoKeith About 200-300 protesters are outside #Minnesota Gov. Tim Walz’s residence in St. Paul, calling for the governor to reopen the state’s economy. pic.twitter.com/vtjcuSDy31

I was optimistic our #ReopenMN RV tour would be a success.But I never imagined the media rolling out the red carpet like this for our first stop, they even sent a chopper. ?But in all honesty, as a Minnesotan I was encouraged to so many Patriots fighting for their Liberty! pic.twitter.com/DvrC6m16Jt

Spurred on by the US president himself – who tweeted in typical all-caps Trumpian style “LIBERATE MINNESOTA” earlier on Friday – some protesters compared the lockdown to “being held hostage,” while another went all-out, dubbing it a “dictatorship.”

Reopen Minnesota. We have constitutional rights. Let people see their loved ones Governor why can’t they wear masks and have their temperature taken just like us when they come to visit. We demand you end this dictatorship.https://t.co/PUVBejGMIl

Minnesota is being held hostage. We must #ReopenMN and we need to do it now!

While the parallels between Minnesota’s stay-at-home directive and totalitarian rule may be somewhat exaggerated, the lockdown does have some teeth, threatening 90 days in jail and a $1,000 fine for workers who disregard the rules, and up to one year’s jail time and a $3,000 penalty for business owners, with the possibility for another $25,000 in fines if officials deem it necessary. At least 25 state residents have been charged for violations of the order, which was recently extended to May 4 by the governor.

The #ReopenMN demonstration wasn’t without its detractors, however, with one woman donning a “coronavirus” helmet and a large sign reading “nurses’ lives matter” – though she noted her counter-protest “was lost on most.”

Thanks for the tweet!! We had fun making the virus helmet. My counter-protest was lost on most! ??‍♂️

As debates raged online and in the street, some critics deemed the protesters “selfish” for sidestepping social distancing guidelines, observing that Friday marked the state’s deadliest day yet in its outbreak, which saw another 17 fatalities. The new fatal cases brought Minnesota’s death toll up to 111, out of just over 2,000 infections in total.

So stay home. No one is saying you can’t do so voluntarily.

apparently today had the highest number of deaths due to covid-19 so far in minnesota, and yet people are out protesting the minnesota governor to reopen the state. love that for them. selfish assholes

With President Trump stating the US – the world’s top hotspot for Covid-19 – had reached the “peak” of its outbreak, on Thursday the White House unveiled new guidelines for governors, setting out a path to reopening the country and lifting sweeping containment measures imposed across dozens of states. Authorities for exactly when and how to reopen were largely left with state governments, which will ease restrictions in phases depending on the rate of new infections, among other things.

Though Minnesota has begun to repeal its own lockdown, its stay-at-home order will remain in force for several weeks to come. With citizens still under orders to limit travel, and prohibitions on a slew of activities – such as camping – still in place, outrage among cabin-fevered residents is unlikely to die down.

The Edomites Kingdom Will Fall And They Will Go Back Into Captivity | Lamentations 4:21

Job Prophesies A Nation of Foolish Degenerates to Rule Over Israelites Today: Dr. Birx Admits She, Fauci Made Up ‘The Science’ On Lockdowns, Social...

This Is the Wickedness Of You Edomites; You & Your Descendants Will Not Go Unpunished As It Is Written | Proverbs 11:21

These Are Parasites Not Clots, Not “Nano-Bots” | Ezekiel 8:10

Edom’s So-Called Diversity Iniatives Are Just Another Lie To Snare Israelites In Their Failing Rulership | Psalms 10:7

Our Women Were Once The Glory Of Our Men | 1 Corinthians 11:7

We Are To Treat, Scoffers And Scorners Whether Heathen or Israelite With Compassion | Luke 6:27

The Edomites Kingdom Will Fall And They Will Go Back Into Captivity | Lamentations 4:21

Be Not Curious In Unnecessary Matters | Ecclesiasticus 3:23

“Japanese” and “Portugese” Israelites That Look Like The Heathen (non-Israelite) Nations | Deuteronomy 28:64

Are Most Men & Women of the Caribbean Israelites? | Jeremiah 16:15

Example Of A So-Called White Man That Is An Israelite But Looks Like An Edomite | Romans 8:16

Christ Pantocrator, Image of the Messiah Before It Was Painted Over | 1 Maccabees 3:48

Are Most West Africans Israelites? | Matthew 24:15