HIRChttps://www.hebrewisraeliteresearchcenter.org
Esau’s blessing and mercy coming to a close.

Former vassal of the US in all but name, the Philippines, among many many others of the Edomite empire…

‘I want to open new fronts with Russia & China as US lived off the fat of our land,’ Philippines’ Duterte tells RT 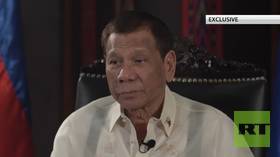 Follow RT on
Speaking to RT, firebrand President Rodrigo Duterte spewed vitriol at the US for seeing the Philippines as “a vassal state,” revealing that he has sets his hopes on reaching out to Moscow and Beijing instead.

“America is not the Philippines and the Philippines is not America. It ain’t that way anymore, and I refuse to dovetail under American foreign policy,” Duterte proclaimed in a candid interview with RT.

Although Washington – which acquired the Philippines from Spain for just $20 million in the late 19th century – had “lived off the fat of the land,” their attitudes haven’t seemed to change over time, he claimed.

The US “looks at us as a vassal state because we were under Americans for 50 years.”

Frustrated by US conduct, Manila has set its sights on Russia and China, which “respect the sovereignty of the Philippines [where] America is totally lacking.”

So if I cannot get a credible posture from the Americans, I can get if from the Russians and the Chinese government.

Last October, Duterte visited Moscow, hoping to boost to his country’s ties with Russia. Trade was high on the talks’ agenda, with top Russian officials saying Moscow was willing to heavily invest in the Philippines’ energy sector, transportation and agriculture.

Also on rt.com ‘Want trouble? You first!’ Philippines’ Duterte dares US to bring its fleet & declare war on China “I’m sure Russia could come here and look for valuable business,” Duterte reiterated in the interview.

There are thousands of miles between Russia and the Philippines, but “we do not think that the distance is on the minus side.” Nothing, he stated, “can really be a hindrance if you really want to do it with another country.”

I want to open new fronts with Russia and China, we have an increase in trade and commerce, it’s robust.

The Philippines, which relied on American arms and technology for decades, has also been in talks with Russia over procuring state-of-the-art helicopters, diesel-electric submarines, and firearms. While the country’s military may want to broaden its arsenals, its appetite is restricted by the availability of funds. “So it’s all money and we are really short of it, actually,” Duterte explained.

Duterte was speaking just as the relationship between the Philippines and the US hit a new low. Recently, US senators adopted sanctions against Manila for the incarceration of former justice minister Leila de Lima – a known critic of Duterte’s crackdown on drugs.

Still waiting to be signed into law, the penalties target Philippines officials involved in her detention.

The Philippines leader threatened to introduce visa restrictions for US travelers who currently “come and enter as if they own the place.”

Regardless of any US pressure, there will be no U-turn in the war on drug trafficking, Duterte insisted. “I’ve told everybody that if you destroy my country, the Philippines, with drugs, I will kill you. There’s no quarrel about that. I will kill you,” he said.

Zerohedge: From Today, All New Vehicles In The EU Will Have Surveillance Black Boxes | Psalms 64:6