Biblical Gemstones Are Anisotropic, Have A Special Lustre, Unique Light Properties, Diamond Does Not | Rev 21:19

The 12 gemstones referenced in our scriptures below have unique properties and represent the 12 Houses of Israel.

(heathen source, read with discernment & spit out the bones)

In the past century, it has been discovered that gems can be classified as either anisotropic or isotropic, and only recently have scientists discovered cross polarized light, which can be used to identify whether a gem is anisotropic or isotropic. When viewed in crossed-polarised light (similar to “pure” light), anisotropic stones produce a colourful array- reflecting all the colours of the rainbow, whereas isotropic stones lose all of their colour and appear black.

It’s interesting that, in Revelation chapter 21, there are 12 gems mentioned to be inlaid for decoration of the New Jerusalem, and ALL of these 12 gems are anisotropic gems, i.e., gems that can show colourful patterns under pure light… 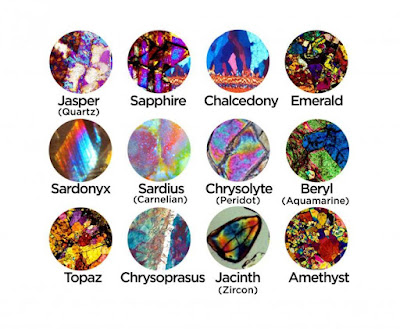 Interestingly, neither diamond, rubies or garnets are mentioned, despite the fact that these group of gems are very very common! For instance, the precious stones are generally considered to be diamond, ruby, sapphire and emerald, with all other gemstones being semi-precious. Turns out, it’s because they are isotropic, when pure light passes trough them, there is no beauty at all…

“For wisdom is better than rubies; and all the things that may be desired are not to be compared to it.” (Proverbs 8:11)

What are the odds?

Of the 28 stones that are normally regarded as gemstones, only 16 are anisotropic. Since anisotropic behaviour has only been discovered in the last century (and John wrote Revelation almost 2000 years ago), the odds of 12 stones picked randomly being in that one group, is about 1 in 1,000! In fact, this analysis assumes that all gems have the same probability of being included, but this is not the case (as some gems are considered more precious than others). Hence, the actual probability is much much lower than 1 in 1,000 for naming all the 12 gems, that are all anisotropic gems, in the book of Revelation!

Keep in mind that there are a few assumptions being made here, i.e. the stones are a literal description of heaven (which I believe are) and that the light in heaven will be like “pure” light, which emanates through the gems…

Could it be possible that God, in choosing the stones for the foundation of the new temple, deliberately avoided stones that would lose their colour and instead chose stones that disperse light to produce brilliant rainbow effects?

“…and there was a rainbow round about the throne, in sight like unto an emerald.” (Revelation 4:3)

When is doublt, always look up the translation from Hebrew, for example the “diamond” translated below is not diamond.

In simple terms, the essential difference between a homogeneous body and a heterogeneous body is whether a beam of light will be broken into two beams after entering the gemstone.

For homogeneous gemstones: Light does not break down after entering the medium. It propagates with a fixed refractive index in all directions (single refraction). This light behavior is known as optical isotropy.

For heterogeneous gemstones: Light breaks down inside the gemstone and propagates with two different refractive indices (double refraction). Unless it comes from a special direction, light becomes decomposed into two polarized beams with perpendicular vibration directions and different propagation speeds. This light behavior is known as optical anisotropy.

King David Is Alive Today And Will Lead The Elect During Jacob’s Trouble | Jeremiah 30:9

Any Israelite Man Or Group Teaching That You Must “Go Through Them” Is Dead Wrong And Of The Modern Day House Of Saul |...

King David Is Alive Today And Will Lead The Elect During Jacob’s Trouble | Jeremiah 30:9

Creation: The Ahlahayam Sung Our Universe Into Existence | Genesis 1:3